Here are some answers to frequently asked questions people ask to better understand the way we worship at the Hoboken Gospel Chapel.

What’s the Lord’s Supper & should I partake? 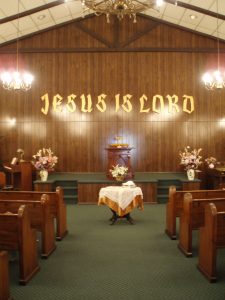 Jesus instituted this Holy Ordinance in the upper room with His disciples the night He was betrayed by Judas Iscariot.  Partaking in the Lord’s Supper was always intended for those who have genuinely come to know Jesus Christ as their personal Lord and Savior.  Also, we hold that only those who have obeyed the command of believer’s baptism by immersion should partake in the Lord’s Supper.

Water baptism does not save an individual (only genuine faith in Christ does that). Yet, our public identification with Christs death, burial & resurrection is not only an important symbol of our commitment to our new found spiritual life but its also the believer’s first act of obedience after salvation.  There is not one account in the New Testament of a person entering into a Christian fellowship and receiving the Bread & Cup without first having been baptized.  The pattern has always been: Salvation by faith in Christ alone, water baptism and then reception into the local church where the Breaking of Bread takes place.

1 Corinthians 11:23 For I received from the Lord that which I also delivered to you: that the Lord Jesus on the same night in which He was betrayed took bread;
24 and when He had given thanks, He broke it and said, “Take, eat; this is My body which is broken for you; do this in remembrance of Me.”
25 In the same manner He also took the cup after supper, saying, “This cup is the new covenant in My blood. This do, as often as you drink it, in remembrance of Me.”
26 For as often as you eat this bread and drink this cup, you proclaim the Lord’s death till He comes.

If you’re a born again believer but have not been baptized you should do so as soon as possible or you should do so once it’s necessity has been revealed to you.  Your baptism greatly pleases the Lord and will be a lasting testimony to others that your faith and conversion was legitimate.  Ask to speak to an elder about baptism at the chapel.